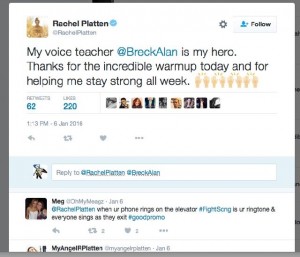 The last several months have been very exciting.  ….

As some may know, I’ve worked with Rachel Platten since 2003 starting in NYC when she was an up and coming singer and performer.  We’d had a couple years where we hadn’t seen much of each other, as I moved to Nashville, and she was touring a lot.  Then early last summer she contacted me to tackle a vocal health issue she was having from the relentless schedule she was on.  Even though Rachel and I had worked for years to get her vocal habits up to the task of handling her very spirited singing, her whirlwind career had made it hard for her to warm up consistently enough show after show, and the wear and tear had led to the bad news that every singer is very afraid to hear, that she’d gotten vocal nodules.  She’d been told she’d need surgery and months of vocal rest to cure them.  I disagreed with that diagnosis and knew that with some work and patience we could not only heal them them naturally, but make sure they wouldn’t return.  And that’s exactly what we did.  And we did it without loosing any valuable promotion time, which is exactly what Rachel was doing for months after her first hit single “Fight Song” was released.  She was touring the world doing just about every promo radio spot and daytime TV show you can imagine, including The Today Show, Good Morning America, Ellen, The View, …etc.

We would work together via FaceTime and some in person sessions several times a week.  I would use several different vocal rehabilitation techniques, and warm her voice up before most shows, (which was often at a ridiculously early hour for yours truly).  We would run through all of the trouble spots in her set and use all of the great communication we’d created from working for so long together, to focus on techniques that would work better in the various live performance situations she was in almost daily.

That hard work and diligence paid off.  Her damaged voice kept getting healthier and healthier.

Rachel was such a trouper through all of this and an absolute inspiration to work with.  Working more often than not, seven days a week and doing high pressure, one to three song performances on far less sleep or rest than most people require, she stood strong and really won over myriads of fans.

But we had to keep the big picture in mind, and continue to get her voice healthy and strong enough to handle the full sets that would be coming up on her tour. The big difference was, that for months she’d been traveling around for promotional shows only doing one to a few songs at a time.  Now we were back to making sure she could do the long sets without hurting herself.  If you’ve listened to any Rachel Platten songs, you know she sings very dynamically and almost all of her songs cover her full singing range.  There aren’t a lot of resting spots in Rachel’s set.

Rachel is a very disciplined person, but it’s easy once you start feeling really centered in your voice, to think that it can handle a little less maintenance.  Let’s just say, I’ve gotten her back to a full “warm up” regimen.  So during several months of her Fight Song and Stand by You promotional tour, Rachel and I chipped away at healing her voice and getting her ready for her upcoming Tour to promote her very successful major label debut “Wildfire” released by Sony Music Entertainment.

I feel like the the whole thing really started coming together a few weeks prior to Tour rehearsals, when Rachel got the great news from her ENT that the vocal nodules she’d been diagnosed with several months earlier were completely healed.

This was of course, outstanding news and we were excited to jump into rehearsals and get Rachel on the tour bus.

Tune back in for Parts 2 & 3 of this blog for some some cool deets on what went into the whole Wildfire rehearsal and tour production………COMING SOON!!!!!!!