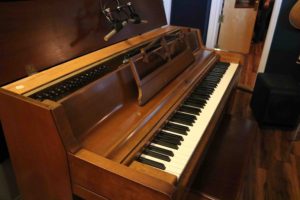 Rachel Platten Wildfire Tour:   Part  2  (The effort required to prepare for a Tour)

Rachel and her team flew me out to LA the 3rd week of Feb to sit in on rehearsals for 3 days and help coach Rachel during her full set to get the highest level of vocals and maintain the vocal health we’d been regaining (via many Skype and some live sessions) over the previous months.  Rehearsals were held at the world famous SIR Studios in Hollywood.  SIR is like walking around a Rock and Roll Museum. Halls of guitars, basses, amps, drums, horns and assorted other instruments in glass cases winding through a space with several rehearsal studios that have been home to God only knows how many Rock legends preparing for tours and recording sessions.

Rachel had been gearing up for this tour for almost a year by traveling all over the world promoting Fight Song.  Putting together a big show for a hit record is no small undertaking, and I applaud Rachel, her band  (Chris Anderson, Craig Meyer and Rebecca Haviland), her personal assistant Clarissa Savage, her manager Ben Singer, and the rest of her team for really stepping up to the plate.

On top of getting the full set together to promote the release of the Wildfire CD, Rachel had been gearing up to ad a lot of dance choreography to the show.  She was working with Paul Kirkland on choreographing dance moves and stage direction for the tour.  She was loving that aspect of the show and you could tell.  She’d been telling me for weeks how much she was enjoying dancing.  The only drawback was, that while learning some fairly difficult dance moves, she was still attempting to sing full out.  It was important to find a method that would allow her to practice the new moves and not tire her voice out.   The microphone was placed by the keyboard.  The songs where Rachel sang and played keyboards at the same time needed to be slightly altered so that she could focus a bit more on the vocals.  This is the beauty of playing with a great band, they can pick up the slack and give the singer some more freedom.  But when Rachel stepped away from the keys and worked the stage she had her hands full with the new dance moves.

As the days wore on, it was clear that Rachel’s mind was often on the choreography and her voice was getting tired.  We were very intent on her not hurting her voice, so we worked together on a few techniques that would allow her to practice the dance moves and not cause any wear and tear to a voice that was basically working 7 days a week.  I won’t go into giant details here, but it’s very important to have the ability to work through vocal material at a variety of energy and projection levels.  With material that covers a lot of vocal range, this can be easier said than done.  So sometimes learning to practice at less demanding levels requires a fair amount of practice in and of itself.  Well fortunately, Rachel and I have worked together for many years and can communicate through a myriad of possible singing techniques.  We would switch it up quite a bit to keep it effective.  A couple things we’d alternate into the equation were using tongue rolls and lips rolls with the melodies of the songs during the choreography.  If you’ve checked out any of my study material, you’ll see that I’m very specific about how to do those exercises, so suffice it to say, if you’re pushing through those exercises, they won’t actually help you avoid the strain we’re looking to alleviate.

This tour was very well planned and lots of great people were involved in putting it together and making it great.  Something Rachel is great at, is listening to the ideas and opinions of everyone involved and trying out several options to reach the very highest level possible.  Something to take into mind is how much energy it costs to try out every option you can.  To literally try the suggestions from those involved takes time and lots of effort.  It’s a testament to what it takes to do things at the very highest level.  Not a small feat.

And smack dab in the middle of rehearsals, her publicity department had scheduled a run of about 5 consecutive interviews.    This took a huge tole on her energy and rehearsal momentum.  It’s hard to switch gears so many times a day and still have any focus left.  Rachel had over worked the day before the interviews and even after a full day of band rehearsal, had stayed late and practiced more dance moves.  Unfortunately she kept singing through this extended stay at a very high energy level, and tired herself and her voice out.  After the second interview you could hear the fatigue in her voice and we needed to find a secluded place in the rehearsal facility and get her voice back to a healthy place.  There we were, out on the loading dock of Sir studios doing some vocal recovery techniques to get her voice centered and back in the right place to continue the day.   Once we got her voice back in alignment, the rest of that day, and the rest of the rehearsals went awesome.

Rachel is very strong, and very disciplined, and in the end always pulls it off.

Tune in next time for Part Three of the Wildfire tour.